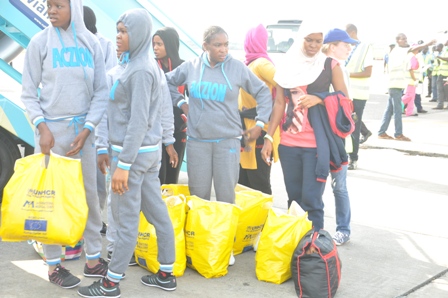 * Some of the Voluntary Returnees from Libya

Voluntary returnees numbering 241  yesterday arrived the international wing of the Murtala Muhammed Airport(MMA),Lagos on board a Libyan Airlines A333 –200 with registration number SA –LAR

Speaking with journalists at Lagos Airport, the Head of Lagos Office, and International Organisation for Migration (IOM), Dr Nahashon Thuo, said that 241 Voluntary Returnees were brought back from Libya on their own volition.

He added that of the 241 Voluntary Returnees, 174 are male,67 women  and among these numbers are three children and three infants.

On why they were brought back to Nigeria, the IOM Representative in Lagos, informed that some of them were trying to cross to Europe but failed and that they were arrested by the Libyan Immigration while others committed immigration offences while in the country. He further stated that they were brought by IOM when they signaled their interest to return home.

Also speaking, the Director of Relief and Rehabilitation National Emergency Management Agency (NEMA), Aliyu Sambo, said that the Voluntary Returnees were brought back to the country by IOM because they said that they want to return to Nigeria.

The Director stated that the Voluntary Returnees, who were in track suit provided by IOM would be given $50 after the agency officials must have talked to them.

One of the returnees, who was assisted into a waiting NEMA ambulance told journalists that he was shot in Libya by the man he was working for, adding that it was good he came back.

The returnees on alighting from the Libyan Airlines were directed into a waiting coastal bus that will convey them to where documentation would take place.

Apart from very few of the returnees, who were still looking good, majority of them, carried bushy beards and hairs on their head, looks that suggest that they may have been kept in camps for days before they were airlifted to Nigeria by IOM.

Agency that were on hand to receive the returnees includes Nigeria Immigration Service, (Port Health from the Federal Ministry of Health and the National Agency against Trafficking in Persons (NAPTIPs)