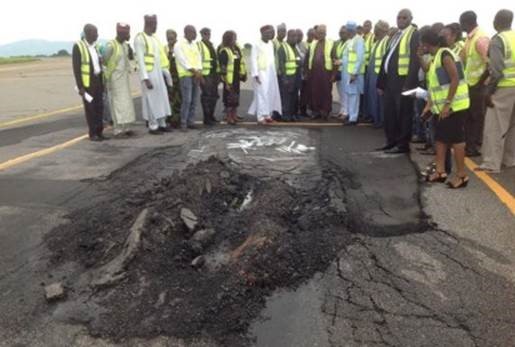 Facts have emerged why international airlines operating into the country through the Nnamdi Azikwe Airport (NAA), Abuja have decided to operate smaller aircraft instead of the wide body airplanes.

Investigation by Abelnews .com revealed  that foreign airlines resulted to operating smaller aircraft  into the country through NAA instead of the bigger wide body airplanes due to the bad nature of the Abuja Airport runway, which has a pot hole on it coupled with the unending scarcity of aviation fuel.

Abelnews.com checks further revealed that there is a pothole on the only runway of the airport managed by the Federal Airports Authority (FAAN), which has damaged the landing gears of aircraft.

Investigation also revealed that because of the pothole on the runway, which has been there for months and which has done more harm than good to aircraft, foreign airline operators have decided to operate into the country smaller aircraft.

The use of smaller airplanes became necessary because the runway can no longer take wide body aircraft because of its deplorable nature.

Airlines that resulted to smaller airplanes are Emirates and SAA.

Investigation by the news platform revealed that in March this pothole damaged four South Africa Airways airplanes and that despite the incidents and others, the Federal Airports Authority of Nigeria (FAAN) has not deemed it fit to repair the runway.

A source at Abuja Airport, who spoke on the condition of anonymity, told our correspondent alleged that even when FAAN wants to carry out repair work on the runway most times they don’t send Notice To Air Men (NOTAM) to airlines and other relevant organisations.

The source also alleged that any time airlines asked FAAN why NOTAM was not sent to airlines, the agency officials in Abuja were quick to say that the directive is from Lagos, an excuse the source said is not tenable in today’s aviation world.

Abelnews recalled that Aviation Minister, Hadi Sirika had told journalists in Abuja airport runway was to have been reconstructed 14 years ago, but that nothing was done and that this led to the deplorable state of some portions.

Sirika had also disclosed that major repairs had not been carried out on the runway since it was constructed in 1982.

According to him, “Ordinarily, the runway is to last for only 20 years, but since the 20 years elapsed in 2002, no serious repairs had been carried out on it.”

Abelnews.com   learnt that the preference for smaller aircraft by foreign carriers  further became pertinent  due to the unending aviation fuel also known as Jet-A1 scarcity that has almost crippled the operations of airlines especially domestic carriers.

A source, who spoke to Abelnews on the issue stated that before the scarcity started and pothole on the NAA runway, foreign airlines were flying wide body aircraft that can take to and fro fuel from their different home countries to Abuja, Nigeria, but that with the perennial scarcity, the foreign carriers had to result to smaller aircraft which cannot carry aviation fuel that would them to Nigeria and back to the bases.

The source added that as a result these aircraft must have to re-fuel in the country before they take off to their respective home countries.

Meanwhile, South Africa Airways Johannesburg passengers that were lodged in Sheraton Hotel in Abuja due to the aviation fuel scarcity in the country have departed for their destination.

Abuja Sheraton Hotel source, who does not want his identity revealed, told Abelnews.com that the passengers were lodged in the hotel because the airline said it could not secure aviation fuel for its operation in the country.

He explained that the passengers departed Thursday morning to Johannesburg.

Efforts to get General Manager, Corporate Affairs, FAAN, and Yakubu Dati to speak on the state of the Abuja Airport runway failed as he could not be reached by our correspondent.