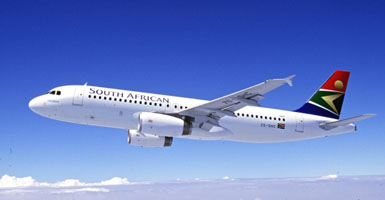 South Africa Airways Johannesburg bound passengers are lamenting their stay in Abuja hotel for four days due to the damage to the airline’s aircraft landing gears at the Nnamdi Azikiwe International Airport (NAIA), Abuja manage by the Federal Airports Authority of Nigeria (FAAN).

Abelnews learnt that the passengers, who are tired of staying in the hotel the airline provided for them are asking the airline to take them away from the hotel.

Abelnews further learnt that the passengers found themselves in this situation because the landing gear of the aircraft which was to take them to Johannesburg picked up sharp object on the Abuja Airport only runway.

The sharp object it was said damaged the landing gear and resulted in the airline cancelling the flight and lodging the passengers in a hotel in Abuja.

The passengers, who had thought their stay in the hotel, would be for a day was surprised that they are still in the hotel four days after the incident.

The National President of the National Association Nigeria Travel Agencies (NANTA), Mr Bernard Bankole, who witnessed the development, lamented that despite the serious damage done to the SAA aircraft due to lack of maintenance, the owner of the airport; the Federal Airports Authority of Nigeria (FAAN) has not deemed it fit to address the issue.

Bankole said that aircraft can only pick up sharp objects on airport runway when the runway is not well managed by the managers; FAAN.

The spokesman of FAAN, Mr Yakubu Dati could not be reached for FAAN’s official comment.