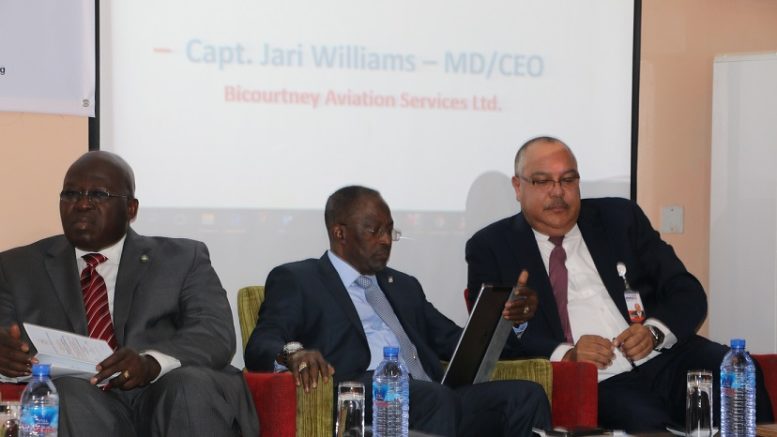 … We Will Not Be Involved In Building Hangar—– FG

As the non availability of Maintenance Repair Overhaul (MRO) facility continues to encourage capital flight out of Nigeria, the Chief Executive Officer of Bi-Courtney Aviation Services Limited (BASL), Capt Jari Williams, has berated the Federal Government for lack of policy on the project.

This is just as he said that for any organisation to establish a viable MRO in the country, the Federal Government must give the initiator subvention, tax waivers, pioneer status and Free Trade Zone(FTZ).

He stated this while speaking on the topic titled, “First Class Maintenance Facility MRO for Nigeria: How Viable” at Aviation Round Table Safety Initiative quarter three breakfast meeting held at the Golfview Hotel  and Suites in Lagos.

Speaking further, the BASL CEO stated when he was the Managing Director of Akwa Ibom International Airport (AKIA),he tried for six years to ensure that Uyo Airport MRO was operational but lamented that government policy has made it impossible for it to come to fruition.

He alleged that a new idea or project may not succeed if the initiator does not belong to a particular group, stressing that this should not be if the aviation industry must move forward.

He hinted that Aero Contractors would have established an MRO because of their they deal mainly with oil industry.

To buttress his point Williams cited the Uyo MRO ,which according to him the Federal Government did not show any sign of commitment to, adding that Nigeria cannot have aviation industry without MRO.

He added that while the Uyo MRO was under construction, a survey was carried out of the on the number of Boeing in the continent and that it was discovered that the continent has a lot of 737 aircraft.

The Akwa Ibom government he said invested huge amount of money on Uyo MRO but regretted that despite the investment and efforts made, the facility has not seen the light of the day.

According to him, “Government has no MRO policy, even the Federal Ministry of Aviation will come inspect and nothing happen. The Uyo MRO is today there wasting away”

The BASL boss argued that for MRO to be place in Nigeria, the Federal Government, the state where the facility is located and airlines must buy into it, adding that anything outside that Nigeria will just be going in circle.

On his part, the President of Aviation Round Table Safety Initiative, Mr Gbenga Olowo accused aviation stakeholders of singing discordant tunes, stressing that these tunes often times does not bring about growth.

He lamented that these tunes are based on parochial and personal gains, adding that the aviation industry is sick and that it was going beyond remedy.

Olowo said that though MRO is good for the industry to stop capital flight but that the management, viability domestically, regionally and internationally must be discussed by the stakeholders.

He added one of the challenges of MRO is who is going to finance the project and if the international airline will be willing to maintain their airplanes in Nigeria when the MRO is eventually set up.

Olowo said that Dollar scarcity, which is affecting airlines, 6,000 travel agencies in the country is a major issue that should be discussed by stakeholders and addressed by  the Federal Government.

Meanwhile, the Federal Government has said that it will not be involved in the establishment of Maintenance Repair Overhaul (MRO) planned by stakeholders in the industry.

The minister, who was represented by the Director of Operations and Training, Nigeria Civil Aviation Authority (NCAA),Capt. Abdulahi  Sidi ,said that the government will only provide conducive environment for the project to thrive .

According to him, “Federal Government will not get involved in the setting up of MRO but will provide conducive environment for stakeholders to build MRO and thrive.”