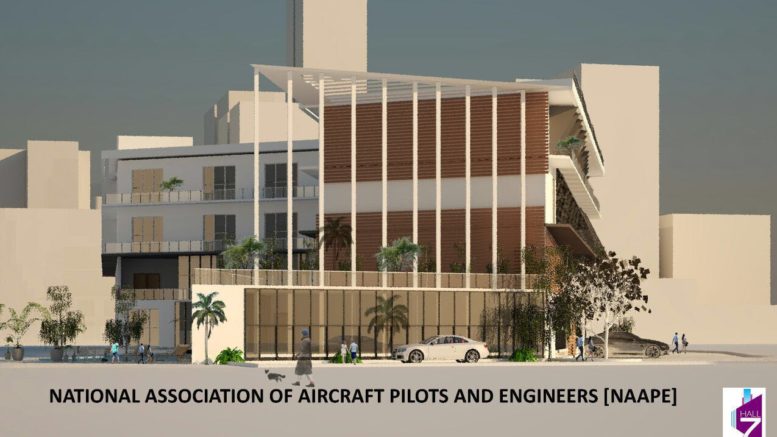 …To House 5 Star Hotel With 150 Rooms
The National Association of Aircraft Pilots and Engineers (NAAPE) is to construct a N2.5 billion state-of-the-art headquarters at the international wing of the Murtala Muhammed Airport (MMA), Lagos.
A post by the National President , NAAPE,Isaac Balami’s on his face book wall, informed that the ground breaking of the edifice will carried out this month and that it will be powered By Hall 7 Real Estate.
The project will be completed within 24 months.
The proposed NAAPE headquarters, he said will include: a 150 room 5-star Hotel, a Club House, 40+ offices, world-class training facilities and Event and Banquet centres.
The building will also have a swimming pool and exercise centre, the NAAPE Hall of Fame, a banking hall, game centres among others.
The National President, who stated that the development gladdened his heart, added that the age-long and foremost dream of the NAAPE to build its headquarters has finally come true.
According to Balami, “This is my proud seventh year as the National President of our Association. We have been deliberating on this matter for forty years and I believe that this achievement is timely: I will be stepping down next year and feel that this will provide a legacy service that will benefit the next generations of the NAAPE. It remains my great privilege to serve until we select my successor to carry forward and continue to deliver to our vision.”
He continued, “I would like to place on record my deepest appreciation to NAAPE, NEC and NAC for their support in taking this unanimous decision to perform this herculean task.”
The NAAPE boss noted that as the longest-serving National President of NAAPE for the last 40 years, he can only share the great honour and privilege it has been to lead aviators through thick and thin, adding that this milestone achievement would not have been possible without the tremendous support of NAAPE Executive.
He stated that when he finally step down next year, he was certain that he would be able to reflect and then smile with pride at the legacy that great team efforts and recurring value that this team has helped him to achieve!
NAAPE which was established about 40 years ago, has been the official voice for pilots and aircraft engineers in Nigeria, fighting for good welfare of its members and enabling the sustainable growth of our aviation sector.