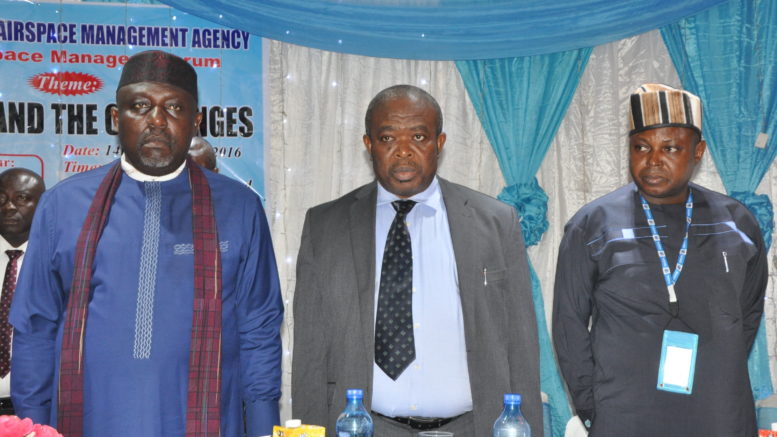 …Says Agency Plays Strategic Role In Aviation
… As Airspace Agency Trains 18 AIS Personnel On Automation
Governor of Imo State,Owelle Rochas Okorocha has hailed the Nigerian Airspace Management Agency (NAMA for effectively enhancing the safety of air travel within the nation’s airspace.
Okorocha made these remarks at the New Imo Concorde Hotel, venue of the recently concluded Airspace Managers’ Forum which held in Owerri, the Imo State capital.
The governor expressed delight that NAMA through its commitment to excellent service delivery has attracted a lot of goodwill to the country.
“Because of the strategic role played by the agency, I can simply define Aviation as NAMA and NAMA as Aviation.” the Imo helmsman said.
Okorocha who was once a Board Chairman of the agency however lamented that due to the invisible but critical nature of its services, “NAMA does all the work, yet it is the least recognised in the system.”
He revealed that as part of efforts to fast-track the takeoff of Imo International Cargo Airport in Owerri in partnership with the Federal Ministry of Transportation, the state government recently awarded contracts for the construction of some airport structures including perimeter fence round the facility to forestall security breaches along the runway.
Earlier in an address, the Acting Managing Director of NAMA, Engr. Emma Anasi, said, “the essence of the quarterly Airspace Managers’ forum was for top echelon of the agency including Airspace Managers across the nation’s airports to brainstorm on critical issues of civil aviation and also design a road map for enhancing safety of air navigation in the country.”
Anasi expressed gratitude to Okorocha for extending a 33KVA line to the airport which he hoped will reduce the agency’s burden of running its navigational aids permanently on generators, even as he solicited the governor’s support in the provision of mobility to ensure prompt response to pilot requests and also ease operational logistics around the airport.
Meanwhile, in preparatory to the commencement of Aeronautical Information Services (AIS) Automation NAMA has embarked on the training of various categories of personnel numbering 18 to build adequate capacity needed for its deployment.
The agency stated that already the first batch of six personnel have proceeded to Frankfurt, Germany for a three-week Train-the-Trainer Course on Map/Chart/e-AIP Publication spanning from July 18 to August 5.
The next batch of 12 trainees is billed to also undergo training in Germany between August 15 and September 2, 2016 ahead of the deployment of Aeronautical Fixed Telecom Network (AFTN)/ ATS Message Handling System (AMHS) in Lagos and Kano which will be networked to other airports in the country using the VSAT Network.
A statement by the NAMA Acting Managing Director, Engr. Emma Anasi stated that the above operator’s trainings which would be conducted by Avitech GMBH at the company’s factory in Germany are critical components of the AIS Automation Project targeted at giving trainees the needed exposure to handle the complex situations associated with the project, stressing that upon their return, it is hoped that they will drive down the process by training others.
Recalled that the NAMA boss at a recent AIS Day celebration in Lagos had expressed determination of the agency to ensure speedy completion of the AIS Automation project in view of the centrality of the project to the success of the ongoing global migration from Terrestrial Based Navigation to Satelite Based Navigation (PBN).