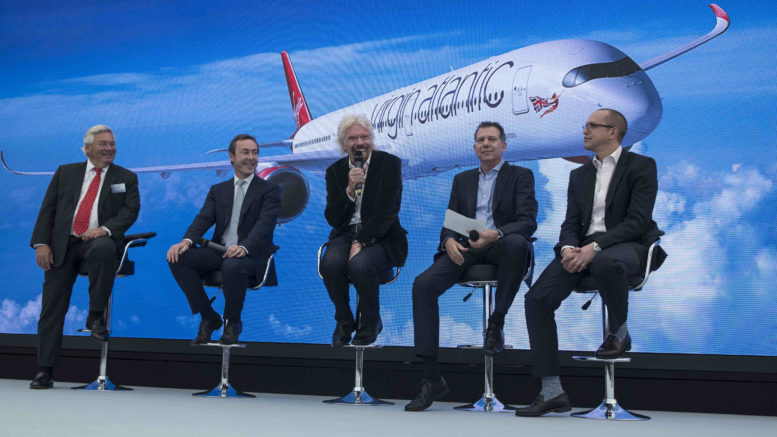 Virgin Atlantic and Airbus has signed agreement on a firm order valued at $4.4billion for 12 Airbus A350-1000 aircraft.
According to the airline the investment demonstrates the strength of the Virgin Atlantic commitment to customer experience as it continues to focus on delivering sustained profit in the long term.
The airline further said that it is part of a fleet modernisation programme, which will see 50 per cent of Virgin Atlantic’s aircraft replaced in a six year period creating one of the world’s youngest fleets.
Virgin Atlantic explained that of the 12 firm orders, eight will be purchased and four leased, as Virgin Atlantic continues its investment into increasing the mix of owned and leased aircraft in its fleet.
The aircraft, powered by Rolls-Royce Trent XWB engines, continues Virgin Atlantic’s investment in a greener, cleaner, quieter fleet and that the aircraft is designed to be 30 per cent more fuel and carbon efficient than the aircraft it replaces in the fleet and is expected to reduce the airline’s noise footprint at its airports by more than half.
Speaking on the development, the British Prime Minister, David Cameron said, “I welcome the news of Virgin Atlantic’s investment. As well as being good news for passengers, it’s great news for jobs in the UK. The fantastic Airbus A350 is part built in the UK with Rolls Royce engines and other suppliers across the country.”
“It’s an investment in the UK itself, and our world-beating aerospace industry.” He added
On his part, the Chief Executive Officers, Virgin Atlantic, Craig Kreeger, said, “The size of this order demonstrates our absolute focus on investing in the future for our customers and our people, and confirms the strength of our business.”
He continued, “The A350-1000 plays a pivotal role in our fleet programme, helping to create one of the youngest, cleanest, greenest fleets in the sky..We’re looking forward to introducing this aircraft to our customers, as its impressive economics, fuel performance, and quiet flying offer an irresistible proposition that makes long haul travel more enjoyable and better for the environment.”
According to the airline the A350-1000, which will replace Virgin Atlantic’s remaining Boeing 747-400s and Airbus A340-600s, is due for delivery from early 2019.
The aircraft, Virgin Atlantic said offers outstanding levels of comfort and reliability and the Virgin Atlantic model will be designed with its customers’ needs in mind, adding that the airline is currently undertaking in depth research, including its customers in the process, to ensure it delivers the industry-leading experience for which it is known.
The airline stated that the aircraft would operate on both business and leisure routes for Virgin Atlantic worldwide with a base at both London Heathrow and London Gatwick, adding that initially the aircraft will fly to key US destinations from London Heathrow.
The aircraft will be delivered to Virgin Atlantic in two configurations one for the business fleet seating up to 360 customers and one for the leisure fleet seating up to 410 customers.
Also speaking Virgin Atlantic President Sir Richard Branson said, “We’re thrilled to welcome the A350 to Virgin Atlantic. It is an outstanding aircraft from both a customer and sustainability point of view. Sustainable growth and meeting our carbon targets is incredibly important to us, and the aircraft’s environmental credentials were a genuine factor in our selection.”
“We will be pairing its cutting edge customer proposition with our own Virgin magic to give customers the best possible experience.” He added.
Airbus President and Chief Executive Officer, Fabrice Brégier, said, “This agreement allows Virgin Atlantic to set the standard on its network by being amongst the first airlines into service with the A350-1000, with an Airspace by Airbus cabin, offering superior comfort including industry leading 18″ wide seats in economy. These modern, efficient A350s will complement Virgin Atlantic’s existing fleet of 10 A330-300s and offer Virgin Atlantic crews the advantage of familiarity with Airbus operating procedures around the network.”