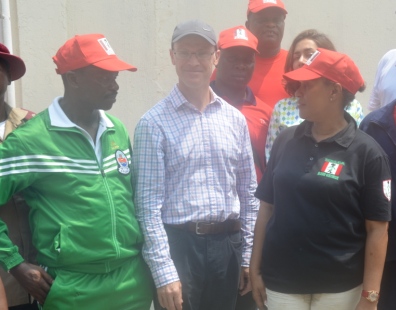 …To Mark Int’l Day Against Drug Abuse June 26
The Chairman/Chief Executive of the National Drug Law Enforcement Agency (NDLEA) Col. Muhammad Mustapha Abdallah (rtd.) said that the estimated street value of seized narcotic drugs in 2015 is over N22 billion.
This just as he stated that as Nigeria joins the world in marking the International Day Against Drug Abuse and Illicit Trafficking which holds on June 26, concerted effort was needed against the threat posed by narcotic drugs and psychotropic substances.
He revealed this while speaking on the state of drug control in Nigeria.
“The threat of illicit drugs is real and concerted effort is required to halt the activities of drug trafficking cartels. The Agency in 2015 seized drugs weighing 903,624.56kg with an estimated street value of over twenty-two (22) billion naira. Drug control is an important campaign that affects national security and public health. We must collectively rise up against drug trafficking organisation. The effect of drugs on children, youths, families and communities is unimaginable. There is need for a greater understanding of the effects of drugs by members of the public” Abdallah stated.
NDLEA arrested 8,778 suspected drug traffickers comprising 8,143 males and 635 females in 2015. A total of 903,624.56kg of narcotic drugs were seized from drug trafficking cartels in 2015. The drugs include cannabis 871,480.32kg, psychotropic substances 30,652.93kg, ephedrine is 785.10kg, methamphetamine 410.82kg, cocaine 260.47kg, heroin 30.09kg and amphetamine 4.83kg. The Agency also won 1,690 cases prosecuted in 2015.
“Nigeria is in the vanguard of the global crusade against illicit drug production, trafficking and abuse. We are committed to our obligations under the United Nations drug control Conventions and we are playing a leading role in regional counter narcotics programmes. Nigeria is making significantly effort in addressed the problem of drug trafficking and abuse. The NDLEA will continue to give drug control all the attention required for total victory” the Chairman assured.
Abdallah identified training and effective collaboration with stakeholders as some of the reasons for the giant strides recorded by the Agency. In his words, “we have made significant progress through training, strict law enforcement and effective collaboration with international and local partners. While consolidating on the gains recorded, efforts are ongoing to improve staff welfare, provide more logistics support and increase funding”.
The theme for the commemoration of the 2016 World Drug Day is Listen First. The Agency on Tuesday held a press briefing to set the ball rolling for a weeklong programme of event. A sensitisation walk against drug abuse took place on Wednesday in Lagos. The campaign which commenced from Ikoyi office of the NDLEA through Falomo and Obalende bus terminal drew participants from the Nigeria Police, Economic and Financial Crimes Commission (EFCC), National Agency for Food, Drug Administration and Control (NAFDAC), Federal Road Safety Corps (FRSC), Federal Airport Authority of Nigeria (FAAN) and United Nations Office on Drugs and Crime (UNODC). Others are Lagos State Ministry of Information, Civil Society Groups, Unity Bank and Skye Bank.
Hand bills with different messages such as Harken to The Cry of Your Child, Listen First Nigeria, Your Child Must Not Be The Next, among others were distributed to members of the public during the walk. The grand finale ceremony will take place on Monday June 27 across the country.